Showing posts from June, 2009
Show all

Michael Jackson: The King of Pop is Dead...Long Live the King!!!

June 26, 2009
Michael Jackson died yesterday. Not surprisingly, most media programs and contents are about him. There are news of internet bogging down because of too many downloads. I’m one of those who caused the bog-down I guess. As I watched Michael’s oeuvre, I couldn’t help but think of the generation he helped define. He probably influenced Gen X more than any other age group. Many of us Gen Xers were adolescents or about to cross that critical stage at the height of his popularity. At a time when there was no internet nor mobile phones, his popularity was such that even kids in rural areas could relate to his music. Who wouldn’t remember Thriller, Billie Jean, Bad? Or the most popular dance move of the era, the Moonwalk? But listening to old interviews of Michael, I couldn’t help but feel sad about the tragedy and irony that was his so-called life. He had such an unparalleled talent, and yet he claimed to be insecure. He said he’d rather wear mask during his performances than show the fac
Read more 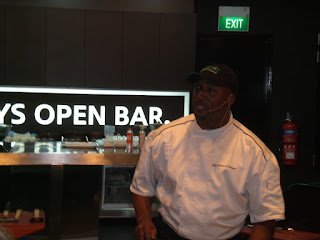 Last night I attended this barbecue sponsored by Mini Cooper. I had very low expectations going into the event that I did not even bother to check who Chef Robert Rainford is. I was going there for the main thing – which for me is the barbecue itself, what else! Before dinner, there was Chef Robert Rainford himself demonstrating to the guests how to get the grill right. I’m not a good cook nor do I have passion for the stove though I do love good food! My belly fat can very well attest to that. But Chef turned out to be extremely entertaining! I was laughing hard at all his well-contextualized jokes…and of course his practical tips are really so helpful, specially to someone like me who does not know much around the kitchen: 1) Soak the skewers in water before starting to grill – this is to prevent skewers from turning into charcoal, i.e., catching fire easily (Well, I know many might consider this basic knowledge, but to me this is NEW!) 2) Put aluminium foil
Read more
More posts