Showing posts from May, 2012
Show all

Mother is not just a noun or adjective. Mother is a Verb: A Mother's Day Special! Today is Mother’s Day. I don’t normally think about this day as anything special because I always think everyday is a mother’s day anyway, but having seen all the greetings on Facebook made me stop and reflect further on what motherhood means. Mother is more than a noun or an adjective. It is a verb. But unlike most verbs, which are words denoting a single act, mother is a series of ongoing action. More conventionally, motherhood starts from conception of, giving birth to, raising a child and guiding the child across life stages. Some moms may not go through it in this sequence – there are those who embody the real essence of motherhood without having physically given birth to a child – the aunts who look after the children of the overseas workers, the adoptive moms (regardless of gender) who adore the adopted much more than any real mom ever could, the elder sisters who take on the role with so much devotion. Motherhood means joy and happiness – that kind of bliss emanating
Read more 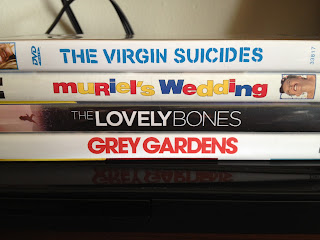 Someday I am going to do a really nice book spine poetry. But for now, I've set my horizons more realistically and settled on DVD spine poetry - which I thought would be easier to manage as I have far fewer DVDs than books. So here we go... The virgin suicides at muriel's wedding resulted to the lovely bones at grey gardens...scary movie genre! Period Film: This is a love story about the duchess and the other boleyn girl at the downton abbey Summer comedy: She's having a baby - it happened one night at the circus on an enchanted April Classic: The taming of the shrew at the last station resulted to war and peace and letters to juliet Senseless comedy mash up: Citizen Kane, Sweeney Todd and the Young Girls of Rochefort were all at the big store Eclectic adventure: There is some kind of wonderful in dreams and motorcycle diaries and Paris Sarcastic Comedy: Gentlemen prefer blondes and room service to an education or a night at the opera
Read more
More posts